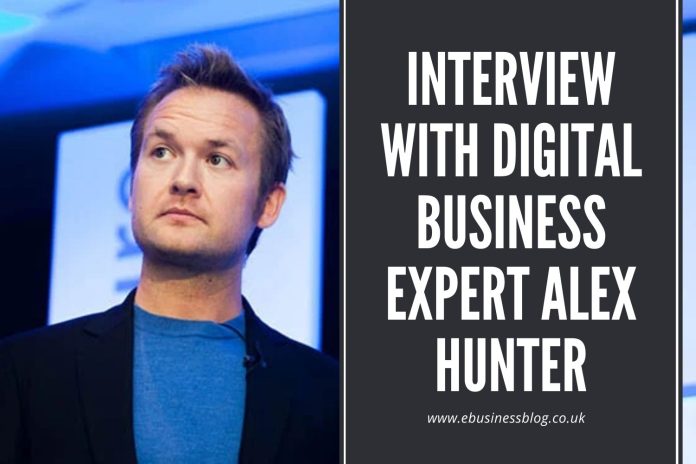 Alex was the Head of Digital for the Virgin Group and has experience with IKEA and Twitter, to name a few of his corporate clients.

In this exclusive Q&A, discover how to cut through the noise and stand out online, from the expert responsible for Virgin’s unprecedented success.

As the Global Head of Online for the Virgin Group, what was the biggest change you made to Virgin’s digital strategy and what were the results?

“When I got to Virgin, they had gone through a tempestuous relationship with digital in the 80s and early 90s, even that far back. They had tried to create a Yahoo type experience – everybody was on that bandwagon – and then the dotcom crash happened.

“What I knew and what everybody else knew was that Virgin and Richard Branson were brands that people wanted to interact with, they wanted to know more about. So, we did a huge project where we completely redid Virgin as a destination, a community site.

“The brand was built on music, and we weren’t talking about that at all. It was a place for people to come and talk to us and try and engage with Richard, learn about the brand, and learn about all of the three hundred businesses in the group at the time.

“That really helped bridge the gap between what is a very diverse group of companies across the world, to tell the story and add a little bit more kind of flavour to the brand itself. It went really well; it was a really fun part of my career! I look back on it very fondly.”

You managed Sir Richard Branson’s personal digital strategy, what did you learn from this experience?

“I learnt that he was a Luddite! Not a massive fan of technology. I have an unlimited respect and love for Richard Branson – he’s just a top guy – but he is a very analogue or at least was a very analogue guy. He has this stack of notebooks that follow him around, they chronicle the birth of every Virgin business.

“He likes to sit there and write things down. And, you know, it’s a satisfying thing to do, so I can understand it. But again, he is a person that people want access to, so we got him on Twitter. It took a lot of persuasion – he’s not exactly the most tech centric guy of that generation, as cool as he may be.

“But then when he realised there was an opportunity to reach a broader audience with his important message, especially around social entrepreneurship and philanthropy, he took to it very quickly and is now certainly, from what I can see, a huge proponent of digital platforms as an engine for change.”

What advice would you give to brand’s wanting to cut through the noise and stand out online?

“It’s been very difficult in the last 18 months with [Covid-19], but I don’t think this idea has changed much. With [Covid-19], we’ve had all the platforms we were used to doing business with, like shops, restaurants, bars, shopping malls, aeroplanes, and hotels, taken away from us almost overnight, and we’ve had to react very, very quickly to that.

“That has increased the amount of noise online exponentially. The kind of paradox here is we’ve forgotten that behind every click and every call is a human being, and now more than ever, we want to be recognised as a human being.

“I think the businesses that have reacted the best to this situation are the ones that do what they say they’re going to do. They don’t try and talk their way through it, just say ‘we’re all in this together’, and ‘in these unprecedented times’ – we’ve seen an unprecedented use of the word unprecedented.

“Just doing what we say we’re going to do it, doing it consistently and doing what we’ve always done, is a hugely reassuring way of being in quite distressing and uncomfortable times.

“So, if you have always done one thing and you’ve done it well just continue to do it. Reach out to people that are clearly fans of what you do, engage with them on whatever platform they engage with you on. Keep that conversation going on a one-on-one level.

“Don’t overengineer the whole ‘we’re all in this together’ thing because it’s actually quite repellent – we got very, very tired of it very, very quickly.”

What is the secret to maintaining customer loyalty in the 21st century?

“I think there’s a couple of things.

“Like I said earlier, I think one of the most important things for loyalty is remembering that with every transaction that’s happening, there’s a human involved – we need to acknowledge that and remember that they are individuals with individual preferences!

“Loyalty is an interesting one. Loyalty is a fundamentally emotional concept, you cannot have loyalty – true loyalty – to a brand, person, dog, whatever, without feeling something. It is physiologically impossible, the part of the brain that controls emotion also controls action.

So, if we want somebody to do something, like buy something else or come back into the store and have a conversation, click the by button, sign the contract, we’ve got to make them feel something.

“And to that end, we must make sure that we stop trying to milk every penny out of every possible click and transaction!

“We’re very good at that, so instead, take a step back and look at the relationships we have with the customer, invest time, money and energy in that relationship.”

What is your proudest professional achievement?

“I was part of the team that founded Virgin America and I joined when there were just a handful of us. We had no aeroplanes, no money, no licence to fly, no nothing. And at the end, we created something that people genuinely loved.

“And we did it – I was very proud of that project.”

This exclusive interview with Alex Hunter was conducted by Megan Lupton for the eBusiness Blog.